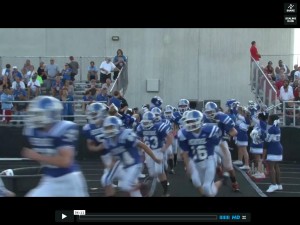 From the Indianapolis Star:

Cardinal Ritter quarterback Jake Purichia only needed the first half to get the dirty work done.

Purichia threw for 164 yards and three touchdowns to lead the Class 2A No. 1 Raiders to a 59-7 victory over 2A No. 7 Heritage Christian on Friday night.

The Raiders have won six straight against the Eagles, including a 42-41 thriller a year ago. This one, though, was over by halftime.

“Something just switched,” Purichia said. “I think everything started going when we knew we could run the ball and pass the ball. Once I knew the pass game and the run game were both there, that’s kind of how I knew we had it in control.”

Senior Logan Beaman, who ran for 145 yards on 12 carries, scored the Raiders’ first touchdown from 1 yard with 7:41 left in the first quarter and last year’s 2A state runner-up never looked back.

CLICK HERE to read the full Indy Star article on the game.